Spirochetes are Gram negative free-living or host-associated helical bacteria, possessing periplasmic fibrils or internal flagellae, which are unique for these microorganisms. They are widespread in aquatic environments and are the causative agents of such important human diseases as e.g. syphilis, Lyme disease, periodontitis, ulcerative gingivitis, and leptospirosis. Treponema pallidum, the causative agent of syphilis, is a tightly spiralled spirochete (about 0.1 μm x 20 μm) transmitted by sexual contact. Treponema pallidum has not yet been grown in synthetic media alone, although it has long been propagated in the testes of rabbits and cell monolayer systems as reviewed by Cox (1994).
Borrelia burgdorferi, which can be cultivated in a synthetic medium, is a larger (0.1-0.3 μm x 30 μm) spirochete, which is transmitted by tick bites to humans and causes Lyme disease. They both belong to the family Spirochaetaceae.
The similarity of the clinical and pathological manifestations of syphilis and Lyme disease, caused by the spirochete Borrelia burgdorferi, (Burgdorfer et al., 1982) is well established (Fallon and Nields, 1994). Borrelia burgdorferi can also persist in the infected host tissue and play a role in chronic neuro-psychiatric disorders. Dementia, including subacute presenile dementia, has been reported to occur not only in syphilis but also in Lyme disease (Dupuis, 1988). Improvement of the cognitive decline following antibiotic therapy was repeatedly reported in both chronic neurosyphilis and Lyme disease. Figure: Drawing of S. Kasas. It shows the structure of the endoflagella and the insertion pores characteristic of spirochetes. 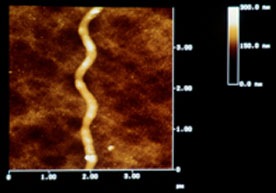