METHODS: Brains of 184 autopsy cases (105 definite AD cases and 79 age-matched controls) were selected and analyzed by histochemical and immunohistochemical techniques. The 3-dimensional reconstruction of the whole cerebrum, with 3-mm spaced serial sections, was performed in 6 AD cases to study the intrahemispheric and interhemispheric distribution of the cortical microinfarcts.

RESULTS: A significant association (P=0.001) was found between the occurrence of watershed cortical infarcts and AD (32.4% versus 2.5% in controls). The microinfarcts were restricted to the watershed cortical zones. Congophilic angiopathy was revealed to be an important risk factor. Perturbed hemodynamic factors (eg, decreased blood pressure) may play a role in the genesis of cortical watershed microinfarcts.

Increasing number of data, including the existence of common risk factors, indicate an association between cerebrovascular disease and Alzheimer's disease (AD). AD is known to be often associated with cerebral hypoperfusion. Recent histopathological evidence showed a significant association between watershed cortical microinfarcts and AD indicating that cerebral hypoperfusion induces not only white matter damage, known as leuko-araiosis, but cortical border zone infarcts as well, further aggravating the degenerative process and worsening dementia. In late stages of Alzheimer's disease--in cases with neuropathologically confirmed definite AD--the occurrence of watershed cortical microinfarcts was ten times higher than in aged matched control cases. Congophilic angiopathy and perturbed hemodynamic factors were found to be important factors in the genesis of watershed microinfarcts. To consider the vulnerability of the cerebral blood flow and the perturbed cortical vascular network in AD is important. Neuroleptic and sedative treatments frequently employed in AD may further accentuate cerebral hypoperfusion by decreasing blood pressure. Therefore, to treat and prevent arterial hypotension and maintain cerebral perfusion at an appropriate level in AD is essential.

It is known that watershed cortical areas are the first to be deprived of sufficient blood flow in the event of cerebral hypoperfusion, which are frequently sites of cortical microinfarcts. Cerebral hypoperfusion occurs in both, AD and neurospirochetoses (Hachinski and Munoz, 1997, Logigian, 1997). 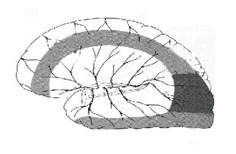 Despite the established association between Alzheimer disease and cerebral hypoperfusion, information regarding the occurrence of watershed cortical microinfarcts is lacking, despite that such cortical infarcts may further increase the severity of cognitive decline in Alzheimer disease.
Accordingly, in the next study, in collaboration with Oda Suter from the University Institute of Pathology, Lausanne, Switzerland and Rudolph Kraftsik from the Institute of Cellular Biology and Morphology, University of Lausanne, Switzerland, we have analyzed whether cortical microinfarcts and disturbed cortical capillary network may also occur in Alzheimer disease (Suter et al., 2002). The brains of 184 autopsy cases (105 definite Alzheimer cases and 79 age-matched controls without any cortical lesions) were selected and were analyzed by histochemical and immunohistochemical techniques. Three-dimensional reconstruction (3-D) of the whole cerebrum, using 3 mm spaced serial sections, was also performed in 6 Alzheimer cases in order to study the intra-hemispheric and inter-hemispheric distribution of watershed cortical microinfarcts (Suter et al., 2002). 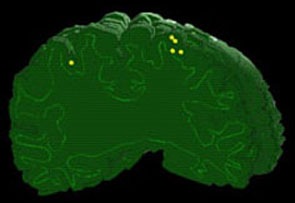 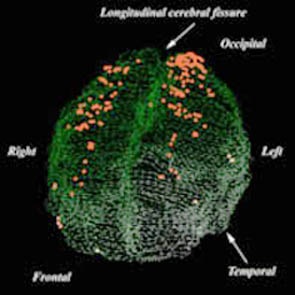 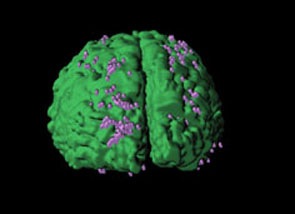 The results concluded that cerebral hypoperfusion induces not only white matter changes in Alzheimer disease, but cortical watershed microinfarcts as well. These microinfarcts may further aggravate the degenerative process and worsen dementia in Alzheiemr disease. For their prevention, to monitor blood pressure and treat arterial hypotension is essential, particularly as neuroleptic and sedative drugs, which decrease blood pressure,are frequently employed in the treatment of Alzheimer disease (Suter et al., 2002).

In the other type of vascular lesion in the meningovascular form of late neurosyphilis and Lyme neuroborreliosis, the parenchymal involvement is secondary to the inflammatory damage of  leptomeningeal arteries with consequent cerebral vascular infarcts (Miklossy et al., 1990).  Their localization, distribution and size differ from the watershed cortical infarcts.

These observations may also give a comprehensive explanation why in neurospirochetoses and in AD cortical atrophy, leading to dementia is frequently associated with vascular infarcts.