6.5. TAXONOMICAL ANALYSIS OF SPIROCHETES ISOLATED AND CULTIVATED FROM THE ALZHEIMER BRAIN

Recently it was reported that, at autopsy, in neuropathologically confirmed cases of Alzheimer's disease spirochaetes were found in blood and cerebrospinal fluid using dark-field microscopy. Moreover, the spirochaetes were isolated and cultured from brain tissue. We now show, using scanning electron microscopy and atomic force microscopy that the helically shaped microorganisms isolated and cultured from the Alzheimer brains possess axial filaments. This indicates that these microorganisms taxonomically indeed belong to the order Spirochaetales. A morphometric analysis reinforces this notion.

Further analyses using scanning electron microscopy and atomic force microscopy (AFM) showed that the helically shaped microorganisms isolated and cultivated from the brains of AD patients possess axial filaments, indicating that taxonomically they belong to the order Spirochaetales (Miklossy et al., 1994) and that they may correspond to several types of spirochetes. 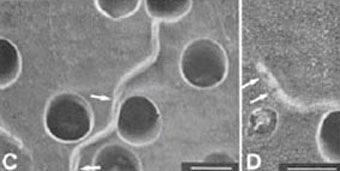 Scanning electron microscopy analysis of the spirochetes isolated from the brains of AD patients showingt that taxonomically the helically shaped microorganisms belong to the order Spirochaetales as they possess endoflagella (B, C) elevating the outre sheet and  fixed at both ends of the bacterial cell with insertion pores (D). Miklossy et al., 1994, NeuroReport.

This study reinforced that observation that the helically shaped microorganisms are indeed spirochetes.

In the next studies we intended to analyze in a substantial number of Alzheimer and control cases whether bacterial peptidoglycan, which is known to occur in virtually all Prokaryotes is present in these helically shaped microorganioms which, in the present studywas defined that taxonomically they belong to the order Spirochaetales.